Environmentalists or Maybe the Opposite

A proposed wind turbine installation near Camp Perry in Northwestern Ohio has recently been halted  by environmental groups that turn out to have connections to the oil, gas and tourism industries. Bird lovers have been tricked into being their supporters! It now appears that a wind turbine erected at The Lake Erie Business Park is being targeted. To quote from one media release, “The Lake Erie shoreline in Ohio is among the worst possible locations for a wind power project.”

The structure and manipulative tactics of these groups should be exposed. It is those with vested interests in the outdated, bird-killing, planet-destroying fuels of the past who are leading the opposition to our move towards a more environmentally friendly future. The wind that blows across the Great Lakes is a plentiful, free, clean, and jobs-creating source of power. We should begin using it as soon as possible.

It is disturbing that people purporting to be bird lovers have managed to prevent the Ohio Air National Guard from erecting a wind turbine close to the shore of Lake Erie. The Black Swamp Bird Observatory (BSBO), as well as the American Bird Conservancy (ABC), claim that migrating species might fly into the tower or blades. Apparently these groups are unaware of the Danish radar studies, done about a decade ago, showing that birds successfully navigate around or between wind installations, and are very rarely killed or injured.

In addition, the ABC and the BSBO don’t point to the actual dangers posed by the skyscrapers of Toledo that these same migrating birds will also be flying through. This is in spite of authoritative U.S. data confirming that by far the most deadly cause of accidental bird death (58 percent of it) is as a result of impact with high-rise buildings and glass windows. Ten percent of it is caused by domestic cats, and only 0.01 percent of it is as a result of hitting wind turbines! 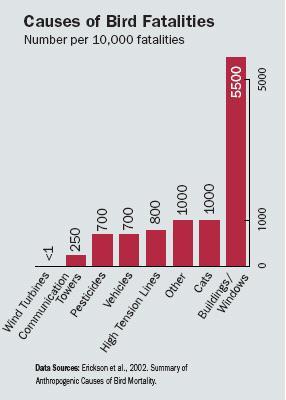 The question is, WHY are these groups doing this?

Are there perhaps some underlying, and competing interests involved?

The ABC’s Vice President and Chief Conservation Officer, Michael Parr, acts as an Advisory Board Member for a conservation fund created by the Crown Prince of Abu Dhabi, whose family control 97.8 billion barrels of proven oil reserves. Parr wrote in June 2015 about a number of ABC projects that have actually been supported by the Crown Prince’s fund. In addition, ABC’s Treasurer, V. Richard Eales, is a Director of Range Resources Corporation, an oil and gas exploration and production company that is currently focused on exploiting the vast Marcellus shale deposits in Pennsylvania and Ohio.

There is no doubt that many conservation societies are genuinely working to protect vulnerable wildlife. However, it seems that using such an organization as cover may also be useful as a marketing tool when the main goal is to distract from the continual extraction of fossil fuels.

As for the BSBO, which states that its mission is the conservation of birds, it was completely hilarious to note on its home page this February that it supports Waterfowl Hunting! Well, after all, if they forbade that, then the $37 million that the area has been gaining from local tourism might be negatively impacted. 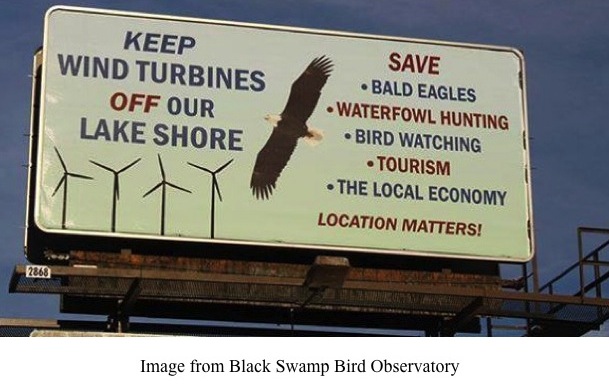 Hypocrisy is just too gentle a description for such deliberate diversion of attention away from the true origins of our problems. The public is being effectively tricked into disliking our planet-saving sources of energy, and being turned back to using those environment-destroying fossil fuels. 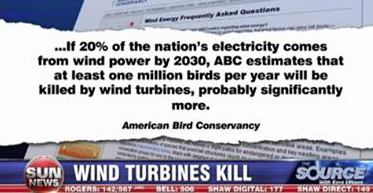 The U.S. Fish and Wildlife Service and others have called climate change the number one threat to all wildlife, including birds. Four Republican former heads of the Environmental Protection Agency recently expressed the immediate need to solve climate change, stating, “The costs of inaction are undeniable. The lines of scientific evidence grow only stronger and more numerous. And the window of time remaining to act is growing smaller.”

Generating electricity through wind power is a vital step in solving the problem of climate change. Wind turbines emit no pollution, require no mining or drilling for fuel, use no water, and create no hazardous or radioactive waste. And installed wind power in the U. S. now displaces nearly 100 million metric tons of carbon dioxide a year – which is the equivalent of taking 17 million cars off the road!

The Ohio Air National Guard are helping to lead the way, with their effort to erect a wind turbine at their Camp Perry site near Port Clinton. They are the TRUE environmentalists!